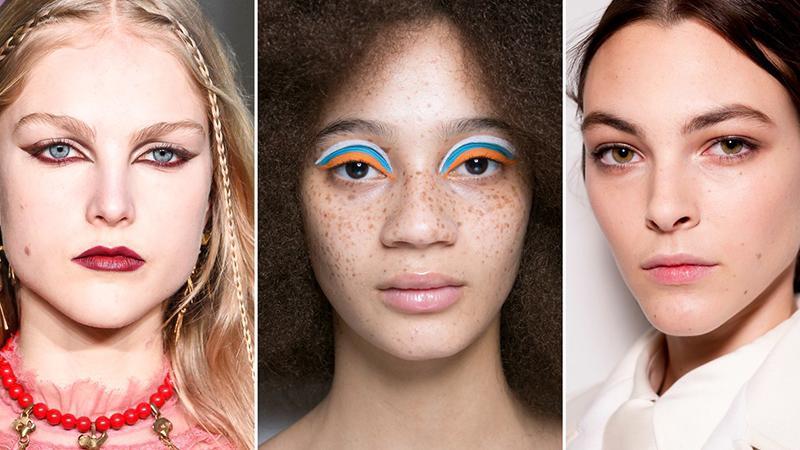 The fall runways felt like a celebration — of women, of individuality, of freedom of expression. That meant shadow was dark and smudgy, but also bright and precise. Hair could be freshly washed or done up in jewels and bows. And a knit hat wasn’t just a simple head warmer. The options were endless, but the takeaway was clear: This season have fun with beauty, and most importantly, stay true to yourself.

Designers used their runways to send a powerful message about feminism and inclusivity this season. “With people all around us putting up barriers, I think fashion tried to break those down and embrace everyone regardless of age, size, or religion,” said hairstylist Guido. We saw women of all ages and sizes walk the runway. There was Simone Rocha, who cast models in their 70s, and Michael Kors, who asked Ashley Graham to walk. At Missoni, models walked the finale wearing pink pussy hats, the new symbol of the women’s rights movement, while at Dior, models wore leather berets, a hat synonymous with revolution and rebellion. And it also marked the first season in which a Muslim model—Halima Aden—walked the runways in New York and Milan wearing a hijab. The beauty looks also played into all of this, with hair and makeup looks celebrating individuality. For example, at Prada, makeup artist Pat McGrath and the designer sent a message about wearing makeup in today’s world: “We’re using it as a statement and as a form of self-expression,” she said. “Not to please other people.”

Clockwise from top left: A model at Simone Rocha, Halima Aden at Max Mara, a model at Christian Dior, Ashley Graham at Michael Kors, a pussy hat at Missoni, and Bella Hadid.

It started with the blunt lob Kendall debuted at La Perla, followed by the edgy cuts Guido gave models Cat McNeil and Irina Kravchenko at Alexander Wang, and the momentum didn’t stop in New York. The rest of the season we saw model after model with cool short hairstyles that had us seriously contemplating making the cut.

When it came to color, the eyes had it. All of it. Makeup artists combined blocks of bold hues on and around the lids with abandon—and a whole lot of originality. “Now, more than ever, makeup is about enjoying color and making statements,” said McGrath, who made plenty of them from New York to Paris. And while some of the looks were fantastical, there were several options that could definitely translate to real life, including Tom Pecheux’s fuchsia liner and pastel shadow pairing at Oscar de la Renta, the two-toned liner at Marco di Vincenzo, and the clashing underliner at Byblos.

The most valuable styling product backstage this season? Shampoo. “Designers want the models’ hair to look clean,” said Guido, referring to the light, airy quality your hair gets when it’s been freshly washed. “It’s become a recognizable texture, just like beachy waves or a bouncy blowout.”

Ditch the lip liner. Forget the indelible mattes. Makeup artists purposely wanted the models’ lipstick to move around, blurring, fading, and sometimes even smearing it over their mouths. “There’s a sexiness to it because it looks like you’ve been kissing someone,” said makeup artist Val Garland, who used three separate brushes to work the cherry-red lipstick into a diffused stain at Giambattista Valli.

Normally, after New York Fashion Week, the craziest nail look we’ll see is red polish…on the toes. This season, however, nail art was taken to the extreme — and with extreme designs and materials. There were Swarovski crystals at Philip Plein, custom-made Minx at Manish Arora, and hand-painted miniature works of art based on the intricate prints at Kenzo and Emilio Pucci.

In an instance of art imitating life, the runways were full of the colorful dye jobs we’re so used to seeing while scrolling through Instagram or simply walking down the street. It ranged from subtle touches, like a streak of red along the part or pastel streaks across the top of the head, to full-on, single processes in punchy, primary colors.

“Braids never go away as a trend,” said Guido. This season’s iteration: Teensy, tiny plaits framing the lipstick shade you’ll want to pick up for fall—bewitching hues of prunes, berries, and purples. “Bewitching” is how McGrath described the pairing at Valentino.

Hairstylists couldn’t get enough of the humble hair accessory, tying it around ponytails, affixing it to low knots, wrapping it around the head like a headband, and even looping it through the hair and tying it off like a present. “A black ribbon is so versatile,” said hairstylist Guido. “You can use it to dress up a t-shirt and jeans or use it to accessorize a cocktail dress.”

Fashion always goes back to black, but this season makeup artists had had enough of formulaic smoky eyes and classic flicks. “We’re not trying to be so perfect,” said Pecheux, who broke out loads of black eye makeup at Balmain, Elie Saab, and Saint Laurent, to name a few. “Imperfection is boring. We want to be unique and rebellious—and maybe say ‘screw you’ to the system.”

Bottom lashes received all the flare and fuss usually reserved for the top ones. Makeup artists overloaded on mascara (Emporio Armani), got arts-and-crafty with lash strips (Chanel, Jeremy Scott, MSGM), and even drew on fake lower fringe for an effect that was sexy and twisted at the same time (Marni, Cristiano Burani, Tadashi Shoji)

Waist-grazing ponytails, mile-long braids, cascading crimps — hairstylists tried to see how low they could go when it came to the season’s most romantic down-dos.

Makeup artists dialed up the most delicate shades in the color spectrum — lilac, coral, baby blue — and applied them messily across the eyes for an effect that was anything but sweet.